What was unusual about my career is that I moved from the consumer industry into pharmaceuticals.  It was about as steep a learning curve as a human being can climb.  I was placed on a brand that relieved pain and inflammation primarily for arthritic patients.  The team were amazing.  Tolerant of my childlike questions.  Considerate whilst I got up to speed.

As you would expect, however, I brought practices and behaviours from my past to my new role.  I asked the team if they had actually met a patient who suffered from osteo or rheumatoid arthritis.  None of them had.  Not one. Ever. But, they assured me, they had read lots of papers and had sat in on research presentations so they knew it all.  Naturally, I challenged this and suggested I lead an initiative whereby every team member would meet a patient and shared what they learned.  They, as ever tolerant of my ideas, agreed.  Except one.  Let’s call him Mike.  Mike was a science advisor.  He was also tall and lanky, like me.  It was his job to read every scientific and clinical paper about arthritis and ensure the team were aware of the latest scientific thinking and treatment trends.  He said to me that he didn’t get why he should meet a patient.  In his words, “I’ve read every scientific paper about arthritis.  There’s nothing I don’t know about how the condition impacts a patient.”

I agreed that he must know a great deal but, I felt from personal experience, you learn more and in a different way when you meet with patients.  I also sensed that he was nervous.  Despite interviewing professors and speaking learnedly at various medical conferences I realised that this was slightly outside of his comfort zone.  I offered him a deal.  If he would be a little brave, embrace a new way of doing things in the spirit of experimentation then I would help him in every way possible to prepare for his patient meeting.  And, if he felt he didn’t learn anything new about patients or the experience had no value, then I would never again suggest it.

The day came.  I knew roughly what time he would get back to the office.  I vividly remember the door to our floor being swung open and him standing scanning the room to find me.  He quick-walked his long frame towards me.  I had no idea what was coming.  “It was brilliant,” he said, “I’ve never experienced anything like it before at all.”  He was almost panting in his excitement.  “The guy I saw,” he continued, ”never stopped moving.  He was constantly shifting his position trying to get comfortable, he even placed a cushion between his knees.  I knew patients can be in constant pain but I’d never seen it before.  He even knew every wobbly paving stone between his house and the local shop so he didn’t go over on his ankle and trigger a flare.  He also knew every bench along the route so he could have a sit-down.”

Mike went on to tell me that the meeting confirmed a lot of what he had read but he’d never really got it until he saw it for himself.  Mike and I are still buddies and I’m pleased to say, as he’s progressed his career, he always insists on his team personally meeting patients.

Get out and Mingle – be better connected. 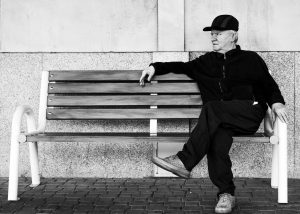